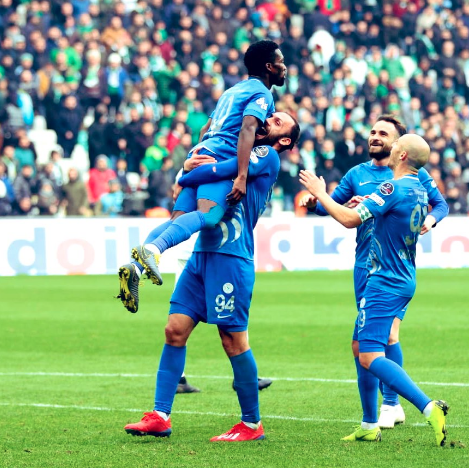 Former Dream Team captain, Azubuike Okechukwu scored his first goal for Turkish side Caykur Rizespor as they extended their unbeaten run to an amazing five games after defeating Bursaspor 2-0 away from home, AOIFootball.com reports.
The 21-year-old midfielder started his second straight league game since his arrival in the winter and marshaled the midfield with fellow international teammates, Aminu Umar, and Chidozie Awaziem also in the starting XI for the visitors.
The visitors took the lead after 12 minutes via the boots of Aaatif Chahechouhe much to their joy before the hosts were forced to an early substitution when Shehu Abdullahi was introduced for Ramzan Keskin on the 35th minute.
Azubuike then assured the visitors all three points when he struck 12 minutes from time to make it 2-0 as Rizespor continued their giant stride off the foot of the table.
The Nigerian narrowly missed out on the man of the match award with a game rating of 8.0, completing 80% of his passes, winning 5 duels, made 3 clearances and also winning 50% of his tackles.
The win lifts Rizespor to 10th on the table with 25 points from 22 games played.