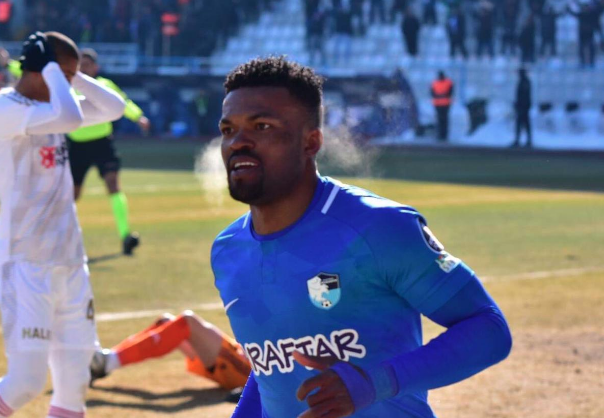 Nigerian international, Samuel Eduok scored his first goal for new club BB Erzurumspor as they ended a run of eight games without a win in their 4-2 bashing over Sivasspor, AOIFootball.com reports.
Having joined the relegation strugglers from Kasimpasa on deadline day, the midfielder started his third league game and showed why the club cashed in on him as he also grabbed an assist in the match.
Jasmin Scuk opened the scoring for the hosts from 12 yards before Sergiy Rybalka equalized for Sivasspor eight minutes later.
Eduok then turned provider for Kristian Opseth to put the host ahead again on the half-hour mark, but the visitors pulled the level for the second time when Hakan Arslani made it 2-2 on the 56th minute.
The hosts then went in front for the third time again when Eduok reacted quickest to head home on the hour mark before former Manchester United forward, Gabriel Obertan ensured the points were safe for the host eighteen minutes from time to make it 4-2.
Eduok was on for 78 minutes and had a game rating of 7.8, completed 91% of his tackles, made 2 key tackles and also won 3 duels.
The win is BB Erzurumspor’s 4th of the season but the club remains in the relegation zone with 21 points from 22 games, three points off 15th placed Fenerbahce in the race for survival.