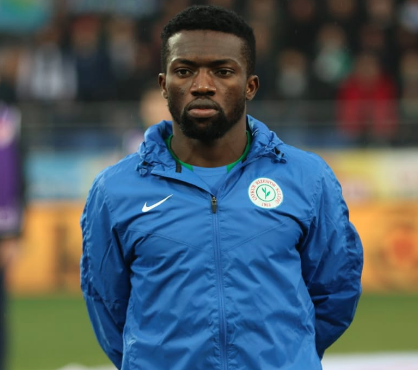 Former Dream Team captain, Azubuike Okechukwu continued his impressive start to new club Caykur Rizespor as he had an assist in their 3-0 win over former club Yeni Melatyaspor, AOIFootball.com reports.
The 21-year-old earned his start for the club and there were also starts for Chidozie Awaziem and Aminu Umar who impressed to help the club move five points of the relegation zone.
Goals from Aatif Chahechouhe and Vadat Muriqi in either side of the half set the hosts on a roller coaster ride before Azubuike put the icing on the cake when he setup Prejuce Nakoulma deep into added time to make it 3-0.
Bothe Azubuike and Awaziem were on for the entire match duration whilst Aminu Umar was withdrawn in the second half with the points already secured.
Similarly, at the Bornova Stadium in Izmir, former Super Eagles’ invitee, Anthony Nwakaeme got his fourth assist of the season after setting up Abdulkadir Parmak to score Trabzonspor’s second goal in a 3-1 away win at Goztepe SK.
With the news of a possible quick return of Ogenyi Onazi back to the team, the visitors were beaming with confidence as Hugo Rodallega was once again the star man for Trabzonspor.
The win sees them solidify their hold on the fourth position with 36 points from 23 games, two points ahead of fifth place Melatyaspor after their away loss at Rizespor.

NFF Awards: Moses: I am over the moon