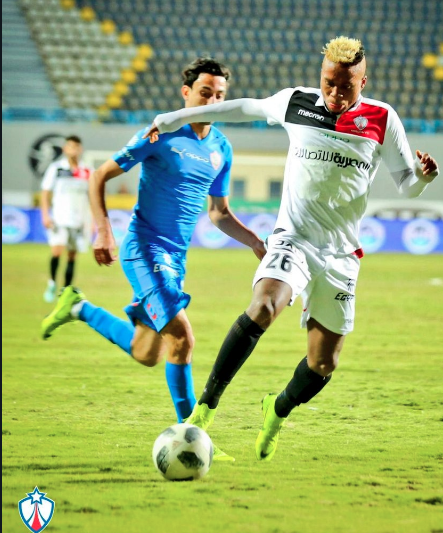 Former Osun United player, Tosin Omoyele scored his first league goal for relegation strugglers Noghom FC as they lost 2-1 away from home, new El-Masry forward Austin Amutu also found the back of the net in his side’s win, AOIFootball.com reports.

At the Port Said Stadium in Port Said, the Trio of Austin Amutu, Ezekiel Bassey and Emeka Eze, were all listed in the squad for El-Masry as they hosted ENPI but it was Amutu and Eze who started the game with Ezekiel Bassey confined to the bench.

Amutu, a new signing who recently joined on deadline day, scored his second goal in four matches before Islam Isaa sealed all three points with a well-taken strike, six minutes from full-time to hand El-Masry a convincing 3-1 win.

The win thus lifts them to 4th on the log with 35 points from 23 games but 13 points off third placed Al-Ahly in their push for a continental ticket.

Meanwhile, at the Cairo Military Academy Stadium, it was a bitter-sweet affair for former Plateau United striker Tosin Omoyele who scored his first league goal since joining the club early last month from the NPFL as his side Nogoom FC.

On for just his second league start of the campaign, the host took the lead from the penalty spot when the ball hit goalkeeper Ahmed Abdelfattah to go in after first striking the bar to put the visitors in front

Ahmed Hassan then made it 2-0 five minutes after the hour mark before Omoyele grabbed a consolation goal deep into added time to record his first goal in the Egyptian League.

The defeat leaves Nogoom at the bottom, three points off the drop zone with 21 points from 24 games played so far.