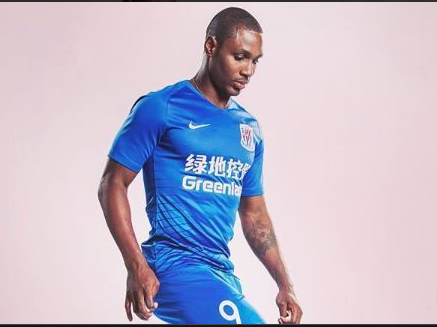 It was a disappointing debut for Nigerian duo of Odion Jude Ighalo and Sone Aluko as both players lost on the opening day of the 2019 Chinese Super League season, AOIFootball.com reports.
Aluko, a former Reading forward, was first to taste defeat in his new club debut for new club Beijing Renhe as they lost 1-0 away at Shandong Luneng with Aluko playing for 87 minutes before being replaced by Xiu Xinyu.
At the Shanghai Hongkou Stadium, Super Eagles’ forward Odion Ighalo endured a difficult debut as his side lost 4-0 in what was a bitter home debut for the former Changchun Yatai forward.
An own goal from Fredy Guarin put the visitors ahead in the first half before second-half strikes from Chinese forward, Lu Wenjun made it 2-0, with Oscar and Odil Akhmedov completing a resounding 4-0 win for the visitors.
Ighalo will be hoping to surpass his last season’s haul of 21 goals as he bids to return Shanghai Shenhua to the pinnacle of the Chinese League.

Ajagun’s last minute strike wins it for Roda in Eredivisie

Andersson’s appointment by Iceland, no bother to Eagles- Udeze