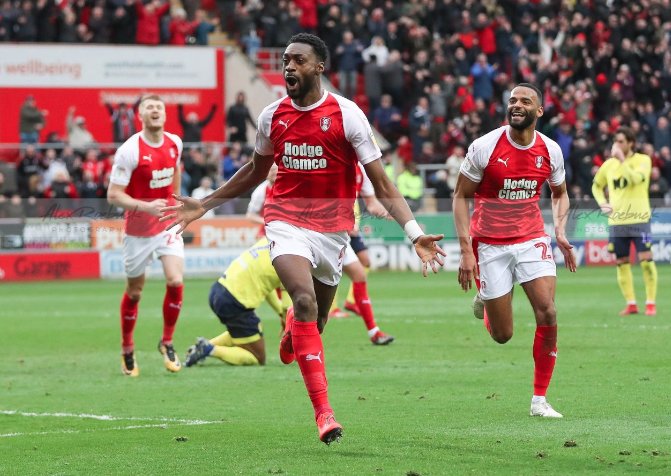 It was a fantastic weekend for Nigerian players in the English Championship with Oghenekaro Etebo scoring his first goal for the Potters while Semi Ajayi scored a brace to ease Rotherham’s relegation fears, AOIFootball.com reports.

MIKEL OBI: The Eagles’ captain started his 6th league game for Middlesbrough as they continued their push for automatic promotion. They, however, had goalless draw away at Wigan Athletic.

The former Chelsea midfielder was on for the entire match duration, earning a game rating of 7.2, completing 94% of his passes, winning six duels and making 2 interceptions.

OGHENEKARO ETEBO: The Stoke midfielder scored his first goal in the colours of the Potters as they downed Nottingham Forest 2-0 at the Bet365 Stadium.

The 23-year-old started his 20th league game of the campaign and put the hosts ahead after 15 minutes when he received a pass from Tom Ince before dancing his way past the Nottingham Forest defenders to fire home from the edge of the box.

Etebo’s joy was however short-lived when he was replaced six minutes after the hour mark when he picked up an injury before Benin Afobe scored sixteen minutes from time to hand the home side all maximum points.

SEMI AJAYI: The Super Eagles’ utility player scored twice for Rotherham United as they continue their quest for survival when they defeated Blackburn Rovers 3-2 at the New York Stadium.

The midfielder put the hosts ahead just after two minutes to put Rotherham in the driving seat early on in the clash.

Amari Bell then equalized for the visitors six minutes after the break before Ryan Williams put Rotherham 2-1 on the 57th minute.

Ajayi then grabbed his second of the game seven minutes from time to give his side a 3-1 lead before Charlie Mulgrew reduced the deficit from the penalty spot, three minutes into added time with Rotherham running out 3-2 winners.

Ajayi was given the man of the match award with a game rating of 8.3, completing 59% of his passes, winning 8 duels and also making 8 clearances.