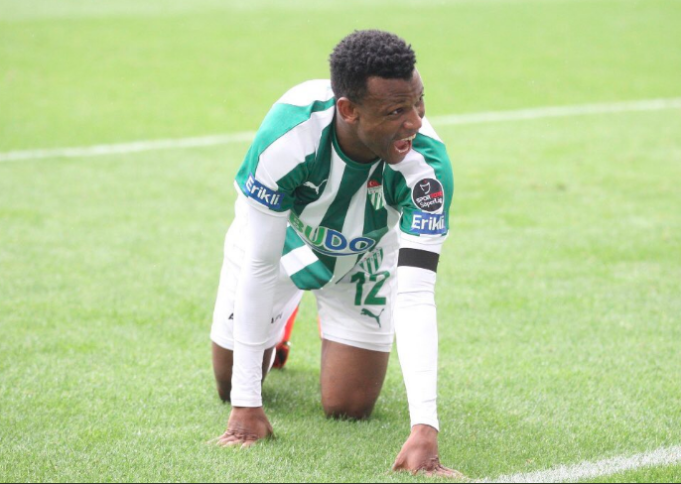 Super Eagles’ versatile defender, Shehu Abdullahi scored his first goal of the season in what was an unusual playing position to lift Bursaspor off the relegation zone in their stoppage-time 3-2 win over Sivasspor, AOIFootball.com reports.
The 25-year-old started only his third league game of the season and was deployed to the attacking midfield lining up alongside Henry Saivet and Yusuf Erdogan in a 4-2-3-1 formation for the Crocodile Boys.
Emre Kilinic put the visitors ahead after 16 minutes before Abdullahi equalized with a powerful header off a cross from Yusuf Erdogan three minutes later to restore parity as both sides ended the half level on scores.
Henry Saviet then put the host in front for the first time when he scored two minutes after the hour mark covering up for the earlier penalty miss of teammate Diafra Sakho but Sivasspor strikes back one minute from time via the boots of Delvin N’Dings to silent the Bursaspor fans.
However, more drama unfolded when Aytac Kara scored seven minutes into injury time to claim all three points for the hosts, much to the relief of head coach Samar Aybaba who was under pressure to save the team from relegation.
The win moves Bursaspor off the relegation zone as they now seat 14th on the log with 27 points from 24 games.

Transfers: Onyekuru has spoken to me about a move to England says Odemwingie