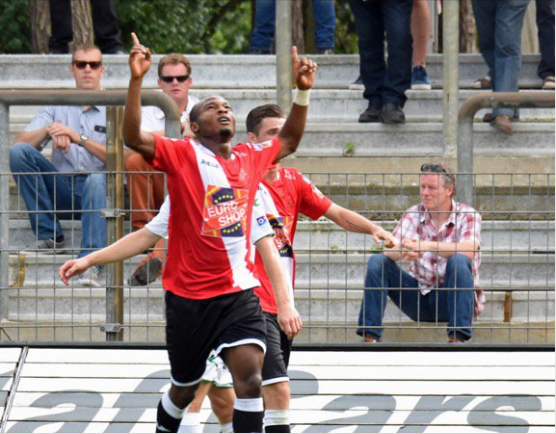 Former U-17 world cup winner, Saviour Godwin was the saviour for KSV Roeselare as they forced visiting KVC Westerlo to a 1-1 draw on the last day of the Belgian first Division regular season, AOIFootball.com reports.

The midfielder was dropped to the bench with compatriot Kingsley Madu starting at left-back as the hosts went in search of their 9th league win.

After an uninspiring goalless first 45 minutes, the Nigerian was introduced 10 minutes after the break for Stijin De Smet to try and open up the visitor’s back line with his trickery and pace.

But it was the visitors who took the lead on 73rd minute when Tunisian midfielder Nader Ghandri found the back of the net with a powerful shot to make it 1-0 before Saviour equalised seven minutes later with a fine strike worthy of mention.

The 22-year-old received the ball just outside the 18-yard box and then left his marker for dead before firing a powerful shot which beat the goalkeeper to his near post to help the hosts gain a point from the clash.

The draw means that Roeselare failed to make it into the Europa League qualification by just one point as they finished 5th with 33 points from 28 games played.