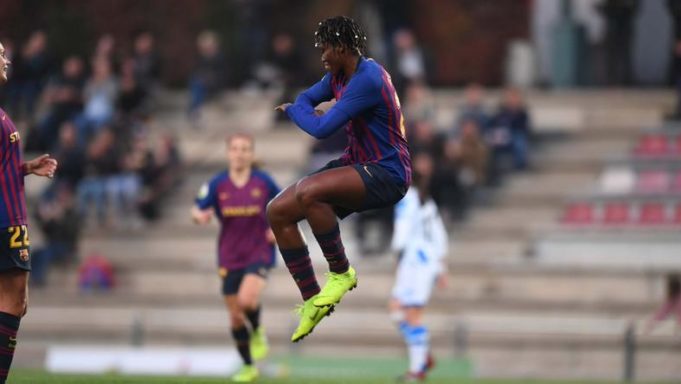 Super Falcons striker, Asisat Oshoala continued her impressive start to life in Spain when she scored for the fourth time in four games as FC Barcelona Ladies kept the pressure on league leaders Atletico Madrid with a 4-1 win over Real Sociedad, AOIFootbal.com reports.
After her impressive outing at the Cyprus Women’s Cup where she scored twice to help the Super Falcons finish sixth, the three-time African player of the year was given her third league start by the Spanish giants.
She, however, did not disappoint as she put the Catalonia Girls in front after 18 minutes when her fierce shot from outside the box flew past the goalkeeper to give a 1-0 lead.
The visitors then drew level nine minutes later via the boots of Nahikari Garcia before Atlanta Bonmati and Marta Torrejon scored twice in the space of two minutes to give FC Barcelona a 3-1 half time lead.
Anderson Alves then completed the scoring fourteen minutes from time before Oshoala was withdrawn in the closing stages of the game.
The win keeps Barcelona on the second position with 60 points, three behind Atletico Madrid who have played a game less.