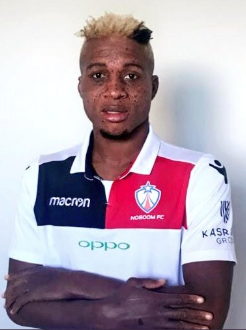 Former NPFL hot shot Tosin Omoyele scored his second goal in the Egyptian top flight as his side Ngoom FC earned a hard fought 1-1 draw away at El-Entag El-Harby, AOIFootball.com reports.
The former Plateau United forward led the line for the relegation battlers whilst another Nigerian James Owoboskini was handed the responsibility to fire the hosts to all three points.
But it was the visitors who drew first blood when the persistent Omoleye put Ngoom ahead with a well-taken goal nine minutes into the clash before Mohammed Mosaad drew the hosts level six minutes later.
Both teams did, however, push for the winning goal but had to settle for a share of the points with Ngoom still searching for their first win in seven games.
The draw, however, takes them momentarily off the bottom of the table with 23 points from 27 games played so far, with just two points separating them and 15th placed Project.

CAF Club Competitions: 2 teams out, 2 in for NPFL