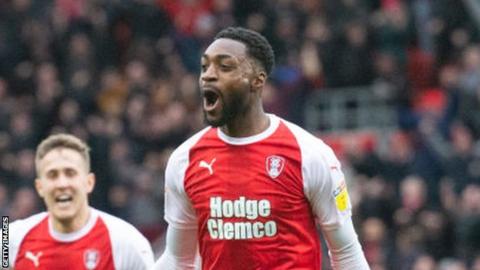 Super Eagles versatile player, Semi Ajayi continued his impressive form in front of goal as he struck for the third time in four days whilst former junior international Sammy Ameobi was also among the scorers for Bolton, AOIFootball.com reports.
MIKEL JOHN OBI: The Eagles’ captain suffered back to back defeats for the first time with Middlesbrough as they lost 3-0 away at Aston Villa.
The former Chelsea ace was on for the entire match duration but was powerless as Middlesbrough’s hope for a top-two finish suffered a major setback.
SEMI AJAYI: The lanky defender turned midfielder scored his seventh league goal for relegation hopefuls Rotherham United as they lost 2-1 at home to table toppers Norwich City at the New York Stadium.
The Nigerian equalized for his side seven minutes after the break to make it 1-1 before Ben Godfrey struck five minutes later to condemn Rotherham to their 16th loss of the season.
Ajayi still managed an impressive game rating of 7.2, completing 70% of his passes and also winning 5 duels in the clash.
OGHENEKARO ETEBO: He returned to action for Stoke City as they drew goalless at the 365 Stadium against Reading to stretch their unbeaten run to seven games.
Having sat out his side’s last two fixtures the Nigerian returned to the starting XI and played for the entire match duration to offer Eagles coach Gernot Rohr joy a had off the Eagles double fixtures against Seychelles and Egypt respectively.
DOMINIC IORFA: The former England junior international scored once and set up another to inspire Sheffield Wednesday to a 4-2 win over Blackburn Rovers.
The youngster set up Steven Fletcher for the first goal on 10th minute before making it 3-1 eleven minutes from time to bet his third league goal in just four starts for Wednesday.
SAMMY AMEOBI: The former national team invitee came off the bench to score what proved to be just a consolation goal as Bolton Wonders hope of survival suffered a major blow as they lost 5-2 to Wigan Athletic.