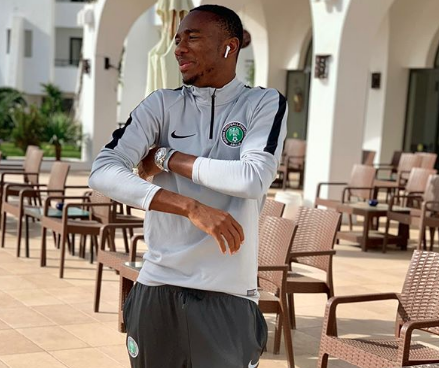 Former U-17 World Cup winning skipper, Kelechi Nwakali has said that the Dream Team are focused beating Libya after reuniting with some of his U-17 teammates since 2015, AOIFootball.com reports.
The Arsenal loanee, who was all smiles when he entered the team’s camp on Monday evening, told AOIFootball.com exclusively ahead of the team’s training later on Tuesday that the atmosphere is buzzing and the players are excited with the opportunity to fly the country’s flag once again.
“Of course beating Libya remains our major focus; we know it won’t be an easy match for both sides but we are very much ready for them regardless of the limited time we have together.
“The coaches have spoken to us already and we know the importance of this match to the nation. We are the defending champions and we would love to qualify and defend our trophy in Egypt,” Nwakali said.
The Porto midfielder further posited that the team will also draw inspiration from the Super Eagles after they beat Libya 3-2 last year in Tunis in an AFCON qualifier to make a return to the biannual tournament after a six-year absence.
The Dream Team VII will take on Libya on Wednesday evening before hosting the return leg next week in Asaba, with the winner of both legs advancing to the third and final round qualification phase in June.