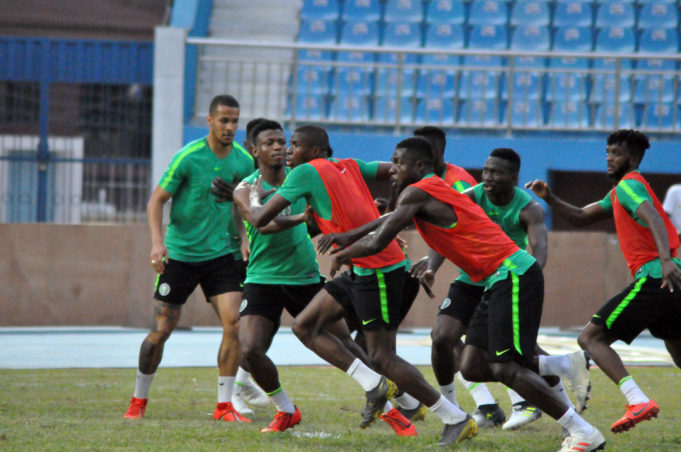 Ahead of Friday’s dead rubber AFCON qualifiers against the Pirates of Seychelles, the Super Eagles of Nigeria took to the training pitch for the final time on Thursday evening looking all smiles ahead of the match.
AOIFootball.com, however, looks at five key moments from the training as witnessed from the pitch side at the Stephen Keshi Stadium in Asaba.
1. Onuachu is a predatory striker: The FC Midtjylland forward showed why Gernot Rohr was right to invite him for the matches against Seychelles and Egypt after excelling in training.
Having previously never played for Nigeria at any level, the in-form striker showed he could be the final puzzle in Rohr’s attacking situation that will surely worry out of form duo of Kelechi Iheanacho and Isaac Success who were both overlooked by the Franco-German.
The 23-year-old will, however, need to transfer every masterpiece he displayed during training to actual play, should he get his chance against Seychelles or Egypt with Rohr also hoping the lanky forward steals the heart of Nigerians in the encounter.
2. Alex Iwobi is becoming Eagles’ creative spark: Despite being criticized for his lack of killer instinct in front of goal, Alex Iwobi has continued to show that he remains the Eagles most creative midfielder after bossing the midfield in Thursday’s final practice session.
The Arsenal wide man was deployed to the midfield against South Africa and impressed as the Eagles picked a return ticket to June AFCON and could continue in the role with Rohr urging the youngster to do more in the creative midfield role.
3. Etebo remains Eagles best free kick specialist: The country may not have a gifted leg like Jay Jay Okocha and Taye Taiwo who in the past showed brilliance from setpiece situations. However, one man has continued to show improvement in his techniques and looks set to take over the free-kick role in the national team.
Etebo burst into the Nigerian scene following his impressive display at the Rio Olympics and has maintained his consistency since then, and also played all three of the Eagles matches at the World cup in Russia.
The Stoke City midfielder displayed accuracy during the free kicks drills and looks set to be Nigeria’s next free-kick taker in place of captain Mikel Obi and retiree Victor Moses.
4. Ighalo still the right man to lead Nigeria: Following his heroics against Libya in Uyo and Sfax, forward, Odion Ighalo seems to have rediscovered his confidence in front of goal for the national team with the former Watford striker banging in goals in the Eagles training session.
Despite the struggles at the World Cup in Russia, the Shanghai Shenhua striker maintained his calmness as he fired the country to the AFCON and has continued to impress in the national team colours with his presence heavily missed in Nigeria’s last game against South Africa and Uganda with any Eagles player failing to find the back of the net in the process.
Barring any last minute injury or loss of form, Ighalo looks like the number one name on the plan to June’s AFCON in Egypt.
5. Valentine Ozornwafor not intimidated by the big boys: Enyimba defender Valentine Ozornwafor has shown he can be the surprise package in the Eagles defense following series of impressive performance in training with the senior national team.
A surprise inclusion in the 23-man squad after his impressive display in Nigerian with the U-20 team, Ozornwafor robbed shoulders with the big boys in Asaba and could be another Godfrey Oboabona heading into the Nations Cup proper should he maintain this same level of performance.

‘We paid FC Ifeanyi Ubah back in their own coin’