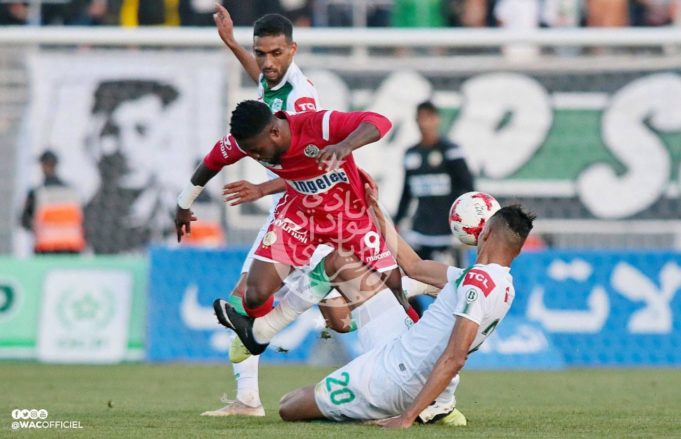 Nigerian international, Michael Babatunde continued his impressive form in the Moroccan League as he scored a brace for runaway leaders Wydad Athletic Club after they thrashed visiting Chabab Rif Al-Hoceima 6-1 at the Mohammed V Stadium, AOIFootball.com reports.
Having rescued a point for the league leaders four days ago, the 2014 World Cup star was again preferred to William Jebor and he produced yet another impressive display in front of the home fans.
Mohammed Nahuri had put the hosts ahead after nine minutes, converting from the penalty spot before Babatunde fired home a powerful left-foot strike on the stroke of half time to give Wydad a 2-0 lead at the break.
Mohammed Ounnajem then made it 3-0, four minutes after the interval before Babatunde again slotted home with his left foot on the 53rd minute to make it 4-0.
The 26-year-old was then replaced by Liberian forward William Jebor three minutes after the hour mark before Walid El Karti and Zoheir El Moutaraji made it five and six respectively, but Martin Bengoa grabbed a late consolation in between the goals.
The Nigerian has now scored seven goals this season to help Wydad stay on top of the league with 52 points from 23 games, 19 points ahead of their closest challengers as they look set to clinch the league title.