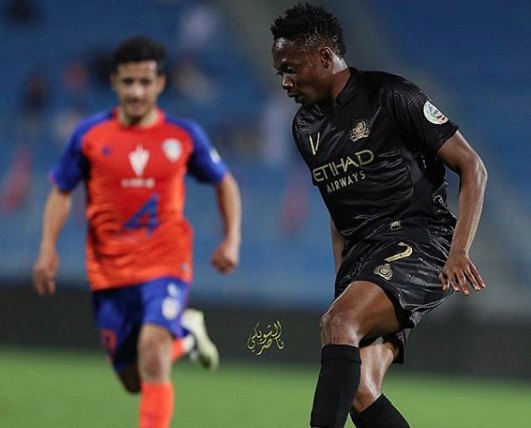 Super Eagles stand-in captain, Ahmed Musa was in fantastic form for Saudi side Al-Nassr as he grabbed an assist in their 5-0 away win away to maintain their slim one-point advantage at the top of the table, AOIFootball.com reports.
Musa, who was named Nigeria’s Player of the Year at the NFF Aiteo Awards, was aiming to end his goal drought after failing to find the back of the net in his last 11 league outings.
It didn’t take long for the visitors to shoot into the lead when star forward Abderrazak Hamdallah put Al-Nassr ahead after just two minutes heading home a delightful cross from Nordin Amrabat for 1-0.
Musa then turned provider for the second goal six minutes later when he setup Petros to tap into an empty net before Mohamed Atwa put through his own goal to increase the tally to 3-0 just on the half hour mark.
Morrocan forward Abderrazak Hamdallah the made it 4-0 with his 24th league goal of the campaign before completing his hat-trick on the hour mark to seal a comfortable 5-0 win for the league leaders.
Musa was on for the entire match duration and had a game rating of 7.0, completed 77% of his passes, made 3 key passes and also created one big chance in the encounter.
The win puts Al-Nassr on course for a historic league win as they remain top of the standings with 61 points, one point off defending champions Al-Hilal with four round of matches left in the league.