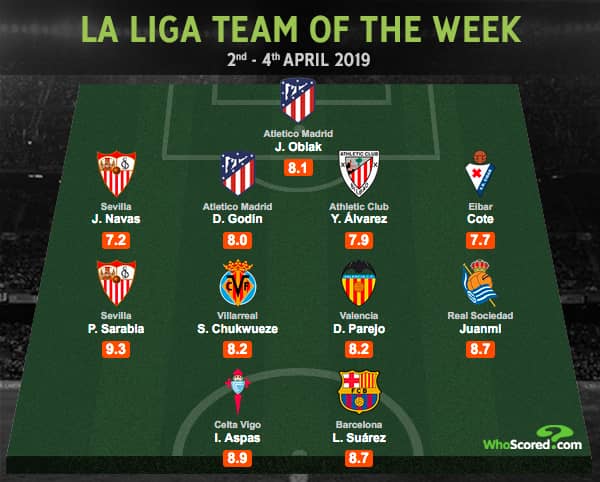 Super Eagles new kid on the block, Samuel Chukwueze as continued to make the headlines after he was named in the LaLiga Team of the Week for match day 30 following his breathtaking performance against Barcelona, AOIFootball.com reports.
The 19-year-old joined a host of big names in the best XI as revealed by Whoscored.com which reserved plenty of praise for the 2015 U-17 World cup winner.
The Nigerian was given a game rating of 8.2 after scoring once and setting up another in Villarreal’s entertaining 4-4 draw with Barcelona on Wednesday night.
Chukwueze was listed in the attacking midfield role alongside Valencia Daniel Parejo whilst the duo of Pablo Sarabia and Juanmi completes the midfield pairing.
Also up for the LaLiga Player of the Week, the Nigerian young player of the year is also one of only two teenagers to have scored four goals in the league this season alongside Huesca Juan Hernández.
La Liga Team of the Week
Jan Oblak
Jesus Navas
Diego Godin
Yeray Álvarez
Cote
Pablo Sarabia
Samuel Chukwueze
Dani Parejo
Juanmi
Iago Aspas
Luis Suarez

AFCON: Rohr needs to have a private chat with Mikel, says Finidi