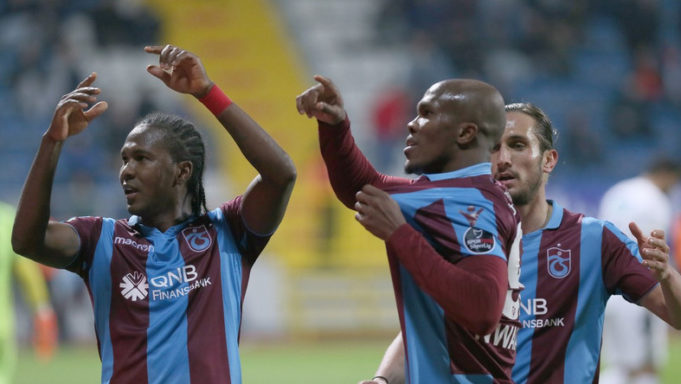 Nigerian international, Anthony Nwakaeme continued his impressive form in front of goal as he scored for the fifth consecutive match to help Trabzonspor to a 4-1 home win over Antalyaspor at the Medical Park Stadium in Trabzon, AOIFootball.com reports.
With star forward Hugo Rodallega missing through injury, the onus was on the Nigerian to deliver the goods for the European chasers and he did not disappoint with his commanding display.
The visitors took the lead in amazing fashion when Souleymane Doukara volleyed home Hamzat Ozmert pinpoint cross to silence the home fans after just 9 minutes.
Nwakaeme, however, cut short their joy when he equalised on the 21st minute tapping home from an Olcay Sahan cross to restore parity.
Caleb Ekuban then put the host in front for the first time in the clash when he reacted quickest following a  fierce shot which had struck the upright despite the visitor’s protection for offside.
With Antalyaspor pushing for an equaliser, Nwakaeme repaid the first half favour as he set up Olcay Sagan to also tap home for 3-1 after beating his marker at the near post before substitute Murat Cem Akpinar completed the rout deep into stoppage time.
The 30-year-old has now scored 9 league goals and provided a further 5 assists to put them fourth on the log with 46 points from 27 games played so far.