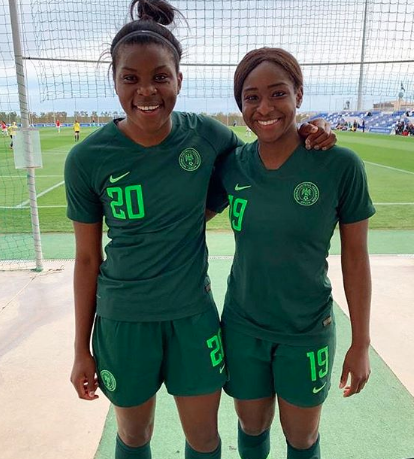 Former U-20 World Cup star, Courtney Dike announced her return to the Super Falcons in style, netting a second-half hat-trick when Nigeria defeated UMF Selfoss 6-1 in a friendly game played at the Pinatar Arena in Spain, AOIFootball.com reports.
After two preparatory tournaments in Korea and Cyprus, Head Coach Thomas Dennerby handed a debut to former U-20 star Uchenna Kanu as she partnered Desire Oparanozie who missed the Cyprus trip upfront.

But it was the Icelandic club who opened the scoring just after the half-hour mark when Reimus Magda breached the Falcons’ defence to put them ahead.

Priority was however restored three minutes to half time when US-based Uchenna Kanu equalised for Nigeria as both teams went into the break one apiece.
Dennerby then wrung in the changes at half time with Ini Umotong, Courtney Dike, Rashidat Ajibade, Anam Imo and Ayinde all coming in for Oparanozie, Uchendu, Kanu, Chikwelu and Ogbe as the Falcons changed their approach heading into the second half
After sustaining their first-half momentum, Nigeria took the lead for the first time in the clash, when Dike scored in the 57th minute after being set up by Ngozi Ebere.
England based Ini Umotong then made it 3-1 on 62 minutes before she added her second seven minutes later for 4-1 tapping home after dribbling past the goalkeeper.
Two further goals from Dike in the 72nd and 76th minute ensured the Falcon’s head into next Monday clash against Canada with confidence as they continue their preparation for the Women’s World Cup in France.
Courtney Dike’s performance could earn her a place in Dennerby’s squad for the World Cup after last featuring for the Super Falcons at the 2015 edition in Canada where she played in two of the Falcons’ three group games.