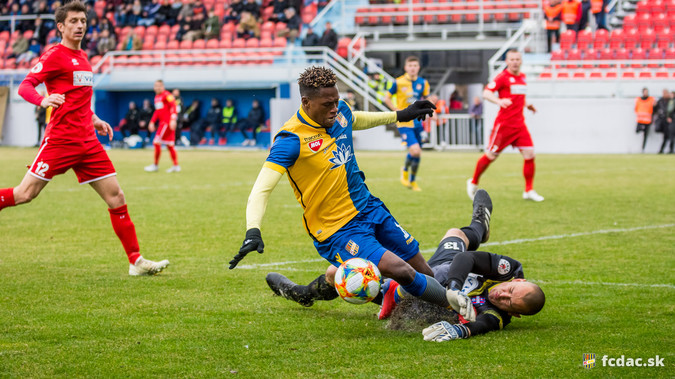 The chances of Taiwo Abdulrahman’s FC DAC 1904 playing in the Europa League next season have been boosted with back to back victories recorded by the team in their last two matches, AOIFootball.com reports.
FC DAC 1904 beat Zemplin Michalovce 2-0 away from home with goals coming from the boots of Eric Davis and Vida in the 57th and 78th minute
Speaking to AOIFootball.com, Taiwo Abdulrahman said the victories have given the team a booster in their quest for Europa League football next season.
“The back to back victory has boosted the Europa League aspiration of the team,” Taiwo said.
Adding that: “We would have loved to play in the Champions League but as it is now it might be quite difficult to catch up with Slovan Bratislava who is currently topping the table with 70 points as against FC DAC 1904 50 points.
He, however, reiterated that the team will continue to fight till the end of the playoff season.
Taiwo joined FC DAC1904 in January from FC Nitra where he had scored two goals and had two assists in five games.

Serie A: Troost-Ekong stars as Udinese earn first win of the year