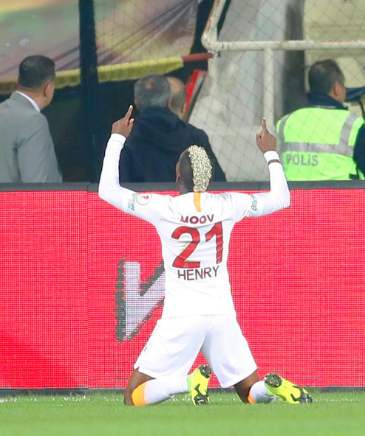 Super Eagles’ forward, Henry Onyekuru was the star for Galatasaray as he struck twice on his return action to send the Istanbul side to their first Cup final in three years after a comprehensive 5-2 thrashing of Yeni Melatyaspor, AOIFootball.com reports.
The Everton loanee missed Saturday’s league win over Kayserispor due to suspension but was handed his third Cup start as Galatasaray went in search of victory following their first leg goalless draw in Istanbul.
The visitors quickly registered their intention in the match with just five minutes on the clock when Onyekuru setup Martin Linnes to give Galatasaray a 1-0 lead before Sofiane Feghouli doubled their lead on the 39th minute.
Danijel Aleksic, however, reduced the deficit for the hosts deep into half time when he converted from 12 yards to make it 2-1.
Onyekuru then stole the show in the second half when he raced onto a pass from Badou Ndiaye on the 58th minute before rounding the goalkeeper and slotting in from a very tight angle.
He then completed his brace 16 minutes from time, racing to a Sofiane Feghouli pass before firing past the goalkeeper to make it 4-1.
Substitute Konstantinos Mitrologu then made it 5-1 on the 84th minute before Arturo Mina put some decency on the score line five minutes later with Galatasaray winning on a 5-2 aggregate score.
The 17-time champions will now face Akhisarspor in May’s final after they also defeated Umraniyespor 2-0 on aggregate to reach the final.