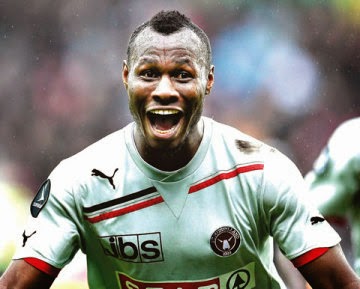 Former Super Eagles forward, Sylvester Igbonu continued his impressive form for modest side FK UFA, scoring twice in their comeback 4-1 win at home to Ural Yekaterinburg, AOIFootball.com reports.
The former FC Ebedei youth player was given the nod to lead the line for the 22nd time in the league but it was the visitors who drew first blood on the 16th minute when Eric Bicfalvi put them 1-0 up.
Andres Vimbergar then equalised for the hosts six minutes later before Ondrej Vanek’s penalty goal seven minutes after the break put UFA ahead for the first time in the clash.
Defender Sergey Bryzgalov was then dismissed for the visitors just before the hour mark to hand UFA a numerical advantage with half an hour left in the clash.
Igbonu then got in on the act 11 minutes from time when he scored his fifth headed goal of the season before making it 4-1 deep into added time as the host moved five points clear off the automatic relegation spot.
The six-time capped Eagles forward has now been directly involved in 11 of UFA’s 23 league goals, scoring 9 and providing two assists to help them to 14th on the 16- team table.