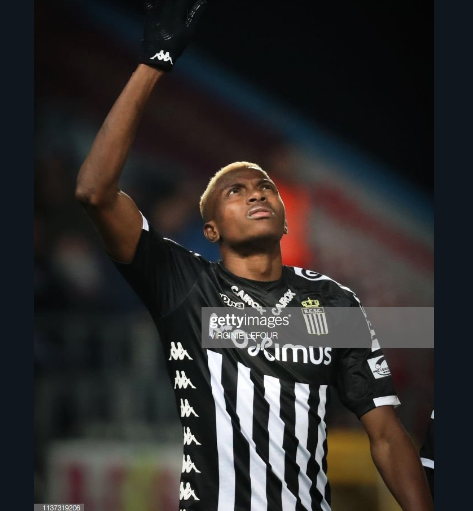 Super Eagles forward, Victor Osimhen continued his amazing form in front of goal for Belgian side Sporting Charleroi as he scored for the third consecutive match in their 2-2 draw away at KV Oostende, AOIFootball.com reports.
The in-form forward led the line for the Zebras for the 25th time this season as they went in search of their fourth consecutive playoffs win.
After a goalless first 45 minutes, Zambian forward, Fashion Sakala opened the scoring for the hosts two minutes after the hour mark as he fired home from twelve yards to put Oostende 1-0 up.
Osimhen then equalised for the visitors six minutes later to make it 1-1 with his 15th league strike of the season before Gabriele Angella put Charleroi ahead on the 80th minute.
However, they were denied their fourth consecutive victory when Robbie D’Haese scored two minutes into additional time as both teams settled for a share of the points.
The draw sees Charleroi remain in second position with 10 points, one behind St. Truidense which has played a game less.

Abdulquadir Adedapo - May 31, 2018
ALL CATEGORIES
SOUNDCLOUD