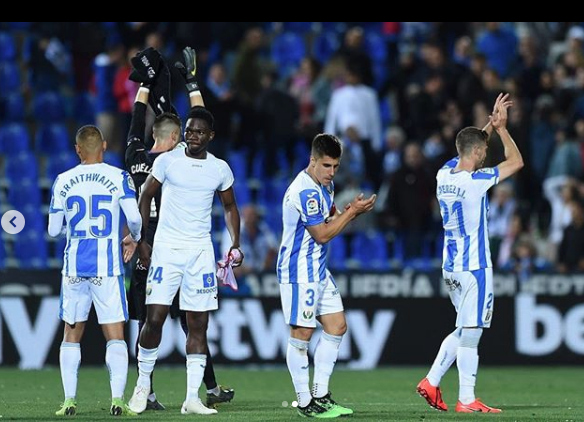 Super Eagles defender, Kenneth Omeruo continued to up his stock in the Spanish LaLiga as he helped Leganes secure another season at the top after they thrashed Sevilla 3-0 at the Ramon Sanchez, AOIFootball.com reports.

Needing at least a point to retain their top-flight status, the visitors came into the match on a backdrop of an impressive display over Celta Vigo whilst host Sevilla were hoping to boost their Champions League qualification hopes.

Two quick goals in the opening 20 minutes from top scorer Youssef En-Nesyri and Martin Braithwaite set Leganes in the driving seat before a late strike eight minutes from time from Oscar Rodriquez completed a memorable 3-0 win for the visitors.

Omeruo was at his usual best and showed composure all through the game, earning an impressive game rating of 7.6, completing 9 clearances, winning 100% of his tackles, six of his seven take-ons and also completed 80% of his passes attempted.

Omeruo wrote afterwards: “VAAAAAAAAMOSSSSSS LEGANÉS. Mission accomplished… what a season it has been.”

The win moves Leganes to the top half of the table as they now occupy 9th position with 45 points from 36 games.