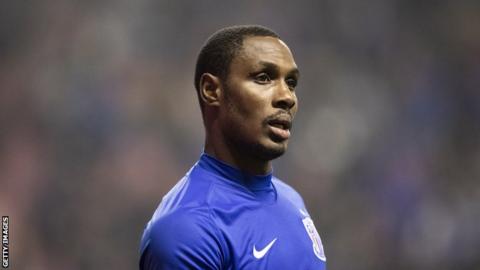 Super Eagles’ Odion Jude Ighalo has given the country a huge relief ahead of the Africa Cup of Nations with news emanating that he would only be out for two weeks following the injury he suffered on Friday, AOIFootball.com reports.

The former Watford of England striker lasted just 10 minutes in Shanghai Shenhua 1-1 draw away at Tianjin Teda before he was replaced by YiZhen Wu.

Eagles gaffer, Gernot Rohr, who put a call across to his first choice striker, told AOIFootball.com afterward that his injury wasn’t too serious and hopes to have him back soonest before the team regroups in Asaba on June 2.

Ighalo’s injury will, however, be a setback for Shanghai who have struggled this campaign as he has been the only spark for the club having netted 50% of their 14 league goals.

The Nigerian forward will now miss league games against Shandong Luneng and Dalian Yifang but could return for their Cup game against Chongqing SWM before heading to Nigeria for the Eagles AFCON training camp in Asaba on June 2.