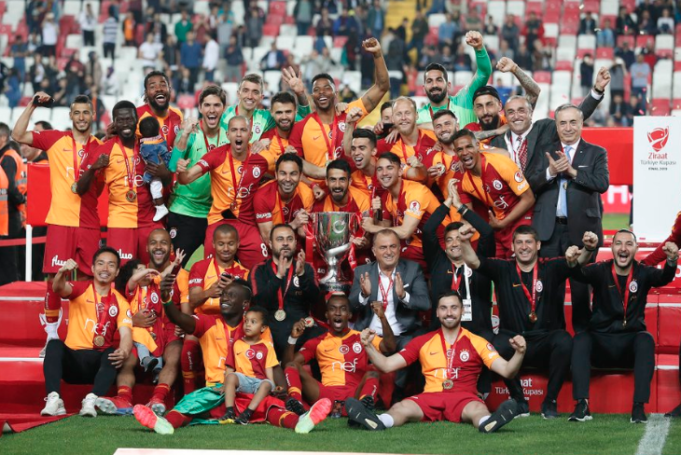 Super Eagles forward, Henry Onyekuru was the hero for Turkish giants, Galatasaray as they came from a goal down to successfully defend their Turkish League title, AOIFootball.com reports.

Playing in front of a jam-packed Turk Telekom Stadium, the hosts were hoping to seal the league title with a game to spare and complete an impressive domestic double following their cup success earlier on Wednesday night.

Despite dominating possession in the opening quarter of an hour, the host found themselves one goal down after 17 minutes when Bosnia forward Riad Bajic silenced the stadium when he put Istanbul 1-0 up and also move them to the top of the league table.

The hosts continued to push for the equalizer and were denied two penalties by the experienced Cuneyt Cakir who was in no mood to bow to the pressure of the rampaging home fans.

Galatasaray will, however, take the lead two minutes after the interval when Algerian forward Sofiane Feghouli produced a moment of sheer brilliance as his overhead kick just inside the box eluded everyone before sailing into the back of the net for 1-1.

The hosts then thought they had completed the comeback five minutes before the hour mark when the ever lively Onyekuru back-heeled a sumptuous pass for Younes Belhanda but the goal was overruled by the Video Assistant Referee because of a foul that occurred in the buildup to the goal.

More drama was then witnessed seven minutes later when Onyekuru seemed to have beaten the offside track for 2-1 but again the Video Assistant Referee came to the rescue of Istanbul as they survived a mirage of attacks from the host.

Two minutes later, the stadium went into ecstasy as Onyekuru timed his run perfectly to stay onside as he guided his header past the goalkeeper to put his side ahead and record his 14th league goal of the season.

The victory sees Galatasaray clinch the title with a game to spare whilst for Onyekuru it was a sweet end to the season as he completed his first ever domestic double as a professional.