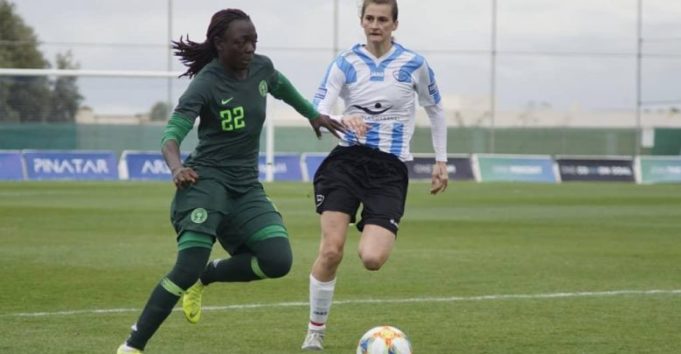 By Pius Idoko
Super Falcons and River Angels striker, Alice Ogebe has vowed to make an impact when the senior FIFA Women’s World Cup gets underway this Friday in France, AOIFootball.com reports.
Expressing her delight whilst speaking with AOIFootball, Alice said she was one of the few home-based players who made Coach Dennerby’s final cut of 23 players that will be donning the green & white Jersey when Nigeria does battle with other countries of the world for the biggest price.
The Benue-born, gifted striker sees the World cup of as a start off point, even as she remains confident of the team’s chances of surpassing their past records at the global stage.
Alice who still has a contract running with River Angels said the world cup appearance means a lot to her and she really appreciates God for the opportunity.
“I know that God will perfect my game. The world cup will be my start off point but my target is to win the trophy with the Super Falcons for the very first time,” Alice enthused.
Nigeria is in Group A alongside France, Norway and South Korea, with an opening match against Norway on Saturday in France.