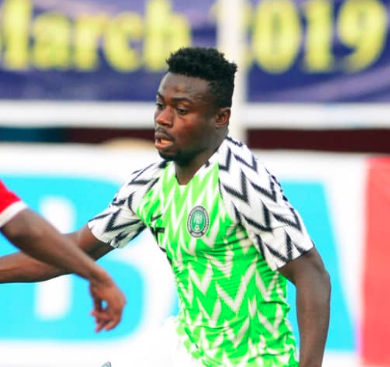 Super Eagles and Levante star, Moses Simon has said he will have no problems playing in any position the coach dims fit at the Africa Cup of Nations in Egypt, AOIfootball.com reports.

Simon, 23, who naturally plays as a winger for Levante has recently shown his versatility to be a makeshift left wing-back for the national team and this was evidently confirmed by Coach Gernot Rohr in a press conference in Asaba at the weekend.

The former Gent man told AOIFootball.com in an interview, that he wouldn’t mind taking up a new role for the Super Eagles, following Rohr’s comment on his positional set up ahead of the showdown in Egypt.

“Quite alright, I will say it’s not my natural position (the left wing-back), but I have no option than to serve my fatherland in any capacity when called upon,” Simon said.

The player, who missed out on the finals of the FIFA World Cup in Russia due to injury, gave his thought on his inclusion in the final 23-man list for the biggest African showpiece.

“It was sad to sit out the FIFA World Cup due to injury but now that I’m the squad, the next level is to fight for the starting position and I believe the coach will make the best decisions regarding his starting lineups, because every player in the 23-man list is good,” Simon concluded.

After regular playing time last season with Levante, the Jos-born player will be looking to capitalize on this opportunity when called up to do so.