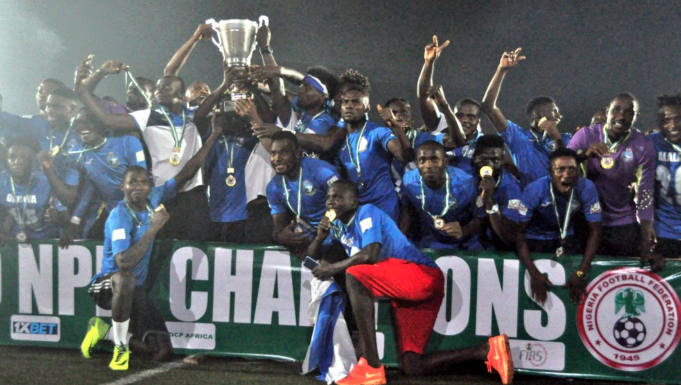 The People’s Elephant needed a win on the final day of the championship playoffs to fend off any possible challenge from second-placed Kano Pillars who were also in a run-in for the league title.

Playing in their traditional all blue jersey, the Aba giants named a strong starting XI with the trio of Dimgba, Ruben Bala and Abdulrahman leading their attack as their former captain Mfon Udoh leading the line for Akwa United.

But with the first half heading for a stalemate, the seven-time league champions opened scoring two minutes to the break when Bala finished off a brilliant team goal to send the Aba fans into ecstasy at the Agege Stadium.

Enyimba then doubled their lead in the hour mark when forward Dimgba headed home a lovely cross from Okorom before a screamer from forward Abdulrahaman just on the dot of 90 minutes sealed a historic 8th league title for Enyimba.

The win now means Enyimba will represent Nigeria in next season’s CAF Champions League and would now also focus their attention on securing a domestic double as they shift their attention to the Aiteo Cup.