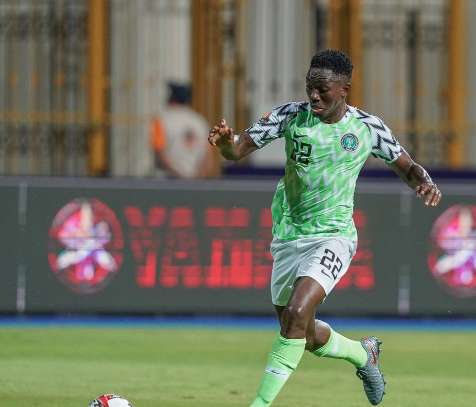 Super Eagles defender, Kenneth Omeruo produced a Man of the Match display, scoring the only goal that sent Nigeria to the Round of 16 of the ongoing Africa Cup of Nations in Egypt with a game to spare, AOIFootball.com reports.

The 25-year-old started his 7th AFCON game, pairing Brighton’s Leon Balogun as William Troost-Ekong was dropped to the bench in one of five changes to the team that beat Burundi last Saturday night.

Despite holding the bulk of the possession, the Guineans failed to find the breakthrough with the Eagles defence keeping them at bay all through the first 45 minutes.

Nigeria did, however, produced near chances with Alex Iwobi and Ahmed Musa testing the Guinean goalkeeper whilst Odion Ighalo fired side netting when he should have squared on for the free Musa to tap in.

The Eagles, however, came out blazing in the second half but the Guineans stood firm with Oghenekaro Etebo firing straight at Ibrahim Kone from a free kick.

However, the Sylli Nationals resolve did crumble 17 minutes from time when the impressive Omeruo leaped highest in the box to head home a Moses Simon corner-kick to hand the Eagles all three points and seal a place in the knockout stages of the competition.

Omeruo was rightfully given the man of the match award with a game rating of 8.4, making clearances and 3 interceptions. He also won 9 of his 11 duels and completed 83% of his passes.

Already qualified Nigeria will next face Madagascar on Sunday needing just a point to end the group as group winners.