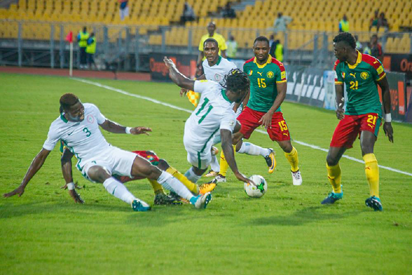 Defending champions Cameroon would have their hands full in the knockout stages of the ongoing African Cup of Nations when they engage 2013 champions Nigeria at the Alexandria Stadium on Saturday, AOIFootball.com reports.

Having finished second in a Group B on six points behind Madagascar, the Gernot Rohr-led boys were made to await the runners up of Group F with the Indomitable Lions clinching the spot after their goalless draw against Benin ensured they finished second behind Ghana on goal difference.

The clash will almost certainly be the biggest of the round with both nations rekindling their old rivalry. Nigeria, however, holds a better head to head record having also defeated the Central African side 12 months ago en-route qualification for the 2018 World Cup.

The Eagles last faced Cameroon at the 2004 edition in Tunisia with the Super Eagles running out 2-1 winners after Jay-Jay Okocha and Peter Utaka cancelled out Samuel Eto’s first-half opener.