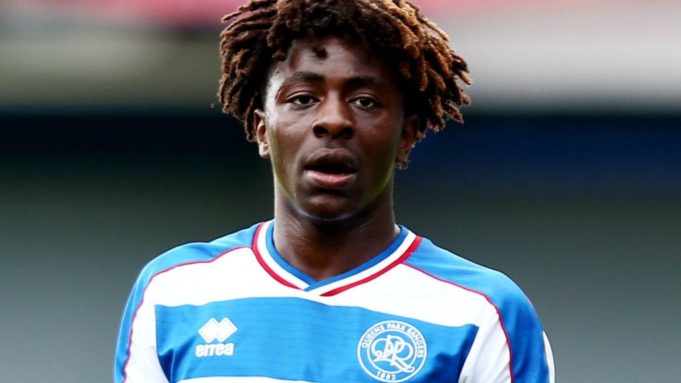 The 2019/2020 league season kicked off in some parts of Europe and Nigerians players were in action with the likes of Ezekiel Henty, Ebere Eze, Abdul Musa Zubairu and Kehinde Fatai all finding the nets for their respective clubs, AOIFootball.com reports.

Whilst it was a winning debut in the championship for defender Semi Ajayi, same could not be said of summer arrival Stephen Odey whose presence failed to inspire Genk to all three points.

Eberechi Eze and Bright Osayi-Samuel: The duo started on both sides of the flanks for Queens Park Rangers as they began their championship season with a 2-1 away win at Stoke City who missed the services of combative midfielder Oghenkharo Etebo who was still on holiday following his AFCON participation.

Osayi was instrumental in the first goal as he set up Jordan Hugill in the eight-minute to put his side ahead before compatriot Eze scored a mesmerizing solo goal 8th minute after the break to make it 2-0 before Sam Clucas pulled one back for the host.

Semi Ajayi: The versatile defender was given his league debut by head coach Slaven Bilic as West Brom started their season with a 2-1 away win at Nottingham Forest.

The 25-year-old played for the entire match duration earning a game rating of 6.9, making 8 clearances, 2 interceptions and also won 6 of his 9 duels contested.

Samuel Nnamani: The 24-year-old came off the bench in the final 10 minutes to inspire visitors AFC Eskilstuna to a 2-1 win away at Ostersunds with the result moving them off the automatic relegation spot.

John Chibuike and Alhaji Gero: Both Nigerians were in mesmerizing form for their respective clubs in a game involving Falkenbergs FF and Helsingborgs IF with both players standing out.

Chibuike put Falkenbergs ahead in the 14th minute after a neat assist from Per Karlsson to record his 4th goal of the campaign but the visitors equalized after the break as both sides settled for a 1-1 draw.

Imoh Ezekiel and Abdul Ajagun: Imoh Ezekiel was on for 72 minutes whilst compatriot Abdul Ajagun came off the bench in the 54th minutes but they both failed to inspire KV Kortrijk to pass Sporting Charleroi who began life without forward Victor Osimhen to claim a 1-1 draw.

Stephen Odey: The summer arrival from FC Zurich made his official debut for KRC Genk coming on in the 83rd minute as they suffered an embarrassing 3-1 loss away at KV Mechelen.

Iyayi Believe: The winger featured for all 90 minutes but failed to add to his one league goal so far as Dinamo Zagreb made light work of HNK Gorica who had former U-17 skipper Musa Mohammed on for all 90 minutes.

David Nwolokor: Nigerian goalkeeper was an unused substitute for HNK Rijeka as they defeated NK Slaven Belupo 3-1 to maintain their perfect start to the season.

The 23-year-old recently returned to the club after a successful loan stint at Slovakian side SKF Sered where he featured in 12 league games last season.

Rabiu Ibrahim: The former Super Eagles midfielder was at his brilliant best, playing the entire match duration of SK Slovan Bratislava 3-0 win away at FK Senica.

Abdul Musa Zubairu: The 20-year-old midfielder scored his first goal of the season, netting what proved to be a consolation for AS Trencin as they lost 2-1 away to MŠK Žilina.

Ezekiel Henty: The former AC Milan forward began his season on a high netting twice in the first half to help Puskàs Akadèmia to a 3-1 win away at Újpest.

Hillary Gong: Nigerian youngster, Hillary Gong featured for 24 minutes on the opening day of the Dutch Eredivisie as he came off the bench for Vitesse in their2-2 draw at home to champions Ajax.

Sebastian Osigwe: Former Flying Eagles goalkeeper was again at his brilliant best keeping his second clean sheet in three games to help SC Kriens to a 2-0 win at home to Chisso in the Swiss Challenge League.

Kehinde Fatai: Nigerian forward was on target for Dinamo Minsk as they reached the last 8 of the Belarusian cup following a 3-1 win over FK Gomel.