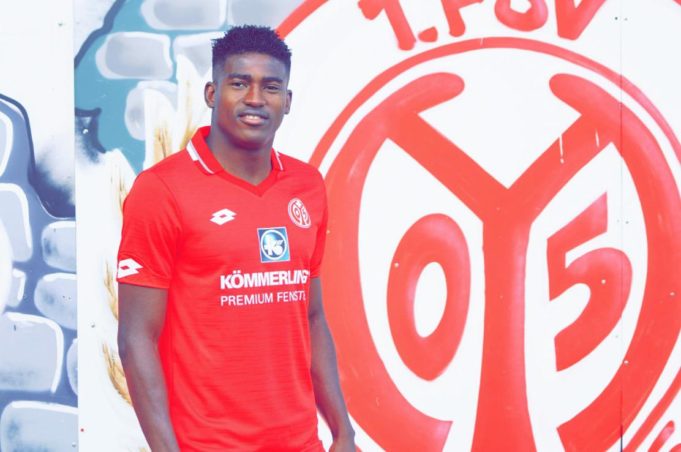 Liverpool FC forward, Taiwo Awoniyi has resumed at his new club FSV Mainz 05 where he would be playing for the season, AOIFootball.com can reveal.

Awoniyi, 21, was announced by Mainz 05 on Tuesday and it would be his first time to play in the highly technical German Bundesliga after featuring in previous loan spells in Belgium with clubs like Royal Mouscron, KAA Gent and Holland with NEC Nijmegen.

Though it will be his second stint in Germany as his first loan was at Bundesliga II side, FSV Frankfurt where he scored one goal in 13 appearances in 2015.

Mainz 05 will be delighted to welcome another Nigerian in their fold with the last being Anthony Ujah who moved to Union Berlin last season.

The official twitter handle of the Bundesliga side confirmed the loan move on Thursday with Awoniyi seen in a handshake with a club official.

has now been confirmed! He will train with the Zerofivers for the first time this afternoon #UpTheMainz.”

Awoniyi will hope it will be a perfect move after his brilliant display in the second half of last season for Royal Excel Mouscron where he raked in 7 goals in 9 appearances for the Belgian side.