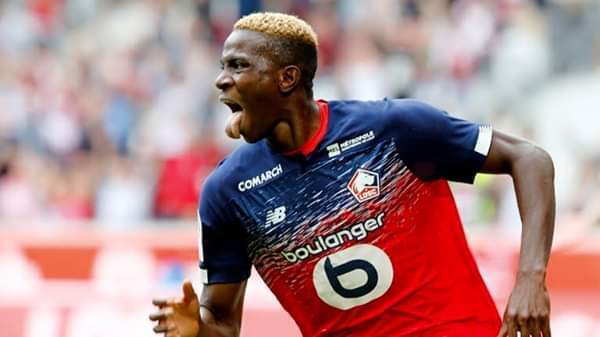 Super Eagles forward, Victor Osimhen has been rewarded for his blistering start to the French Ligue 1 after he was named in the opening day team of the week by statistical giants SofaScore, AOIFootball.com reports.

The 20-year-old who recently arrived the French League from Belgian outfit Charleroi, scored in either half of the game to propel last season’s runners up Lille to a 2-1 victory over FC Nantes to begin their season on a winning note.

The 2015 FIFA U-17 golden boot winner leads the front line in a 3-4-3 formation alongside PSG Kylian Mbappe who scored once and assisted another in PSG’s 3-0 win over Nimes whilst Reims Boulaye Dia completed the front line pairing.

Osimhen, however, lost the player of the week rating to goalkeeper Romain Salin who finished with a rating of 8.6 compared to Osimhen 8.2 with the Nigerian, however, walking home with the man of the match award.

Osimhen made 26 touches of the ball and scored from his both shots on target whilst also completing 73% of his passes.