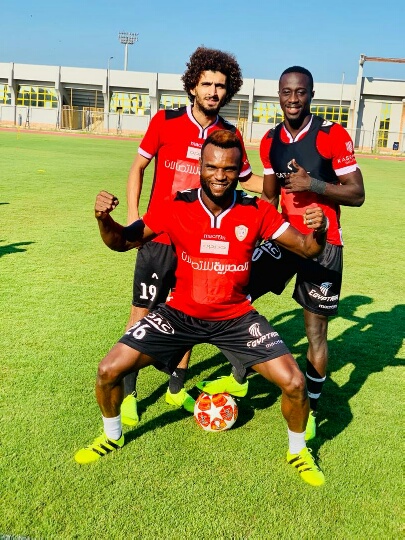 Former Plateau United of Jos striker, Emmanuel Odafe is on the verge of sealing a deal to play for El Geish FC in the Egyptian Premier League, while Petrojet FC have also indicated a strong interest in the goal poacher, AOIFootball.com has gathered.
Speaking exclusively to AOIFootball.com, a source close to El Geish FC said negotiations are ongoing, as the player has scaled through all necessary hurdles and the deal is almost done.
“Emmanuel Odafe has passed the trial with El Geish FC and has fulfilled all the necessary requirements for his transfer.
“Negotiations are still ongoing, but at an advanced stage, he is most likely going to play for El Geish next season, the source said.
According to the source, the former Burgan FC of Kuwait striker has also caught the eye of Petrojet FC officials in one of the trial matches he featured in, with a man of the match performance.
“Odafe also won over the hearts of Petrojet technical officials in one of our test matches, in which he got a goal.
“His performance in that game triggered interests from Petrojet FC, but El Geish FC is most favoured to sign the striker before the league commences,” the source concluded.