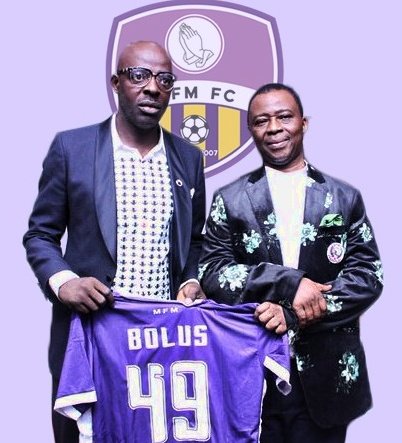 Coach Tope Tony, popularly known as ‘Bolus’ has been unveiled by Nigeria Professional Football League (NPFL) side, Mountain of Fire and Miracle Ministries (MFM) FC, as the replacement for Fidelis Ilechukwu, who left the Olukoya Boys after 13 years at the helm of affairs, AOIFootball.com reports.
The ceremony, which took place at the corporate headquarters of the church, had in attendance the General Overseer, Dr. Daniel Olukoya and other top hierarchy in the church, as well as representatives of the State Football Association and stakeholders in the football family.
Speaking exclusively to AOIFootball.com shortly after the unveiling ceremony, the former Giwa FC of Jos gaffer, stated that his decision to take up the assignment falls in line with part of the calling of the General Overseer of the church, to reach out to the youths through football.
“My decision to take up this job conforms with part of the agenda of the church to reach out to youths through football,” said the former Malumfashi FC of Katsina coach.
“We will also compete successfully in the league, ensuring that the team keeps going higher,” he added.
Bolus, who started his career with FC Abuja almost a decade ago, also maintained that he couldn’t hide his love and admiration for the achievement of his predecessor over the years, hence, he wants to consolidate on the legacy of the ‘working one’ as Ilechukwu is fondly called, and take the team to the next level.
“I’ve always been in love with the playing style and philosophy of Fidelis, which is identifying raw talents and making them superstars.
“We already have a pattern on the ground that we can work with, and we don’t intend to deviate from it,” he further stated.
It would be recalled that Bolus won the last MFM national football competition with the Abuja branch of the church, and the almost six feet tall coach who is a devoted member of the MFM family, submitted that it is a life long dream for him to work under his spiritual father, and that remains one of his greatest motivation in life.
“I feel fulfilled to work under my spiritual father; that alone is a great motivation for me because it is a once in a lifetime opportunity,” Bolus concluded.