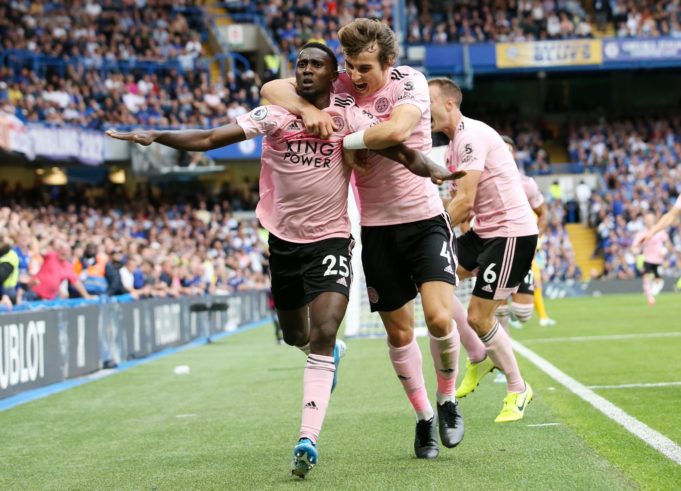 Super Eagles midfielder, Wilfred Ndidi opened his scoring account in style as he helped Leicester City to a 1-1 draw away at Chelsea to pile more pressure on new boss Frank Lampard, AOIFootball.com reports.

Used as the club’s match day poster to the trip to Stamford Bridge, the Eagles combative midfielder was surprisingly robbed off the ball after just 7 minutes by Blues young midfielder Mason Mount who made no mistake in putting Chelsea 1-0.

Chelsea dominated the rest of the half and could have gone in 2-0 up as Mount headed straight at Schmeichel unmarked from eight yards, while N’Golo Kante was denied from close range by a superb last-ditch tackle by Christian Fuchs.

Leicester upped their game after the break, going close as Maddison rounded Kepa Arrizabalaga, only to see his centre cleared by Jorginho.

Leicester’s leveler was deserved as Ndidi made amends, rising superbly above Cesar Azpilicueta from Maddison’s right-wing corner to leave Kepa rooted to record his first goal of the new campaign.

The Nigerian however missed out on the man of the match award but still had an impressive game rating of 7.3, completing 4 interceptions, 3 clearances, 80% of his passes and winning 9 of his duels contested.