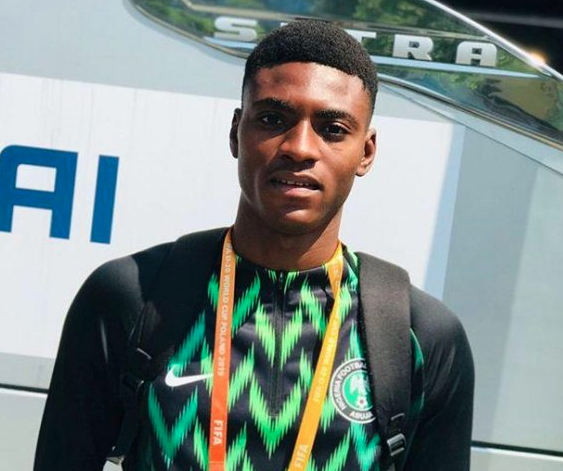 Flying Eagles striker, Emeka Chinonso has expressed delight following his debut for the team in their second group game against South Africa at the ongoing African Games in Rabat, Morocco, AOIFootball.com reports.

The striker was a second-half substitute and despite the limited minutes he played, he gave a good account of himself, carrying out from instructions from Coach Aigbogun, holding play and controlling pace upfront and was a big concern to the South African defence.

Speaking to AOIFootball.com after the game, the Water FC forward said he was eagerly looking forward to his debut and he was grateful it came with the win against South Africa.

“I was waiting for the very minute I would be called upon to make my contributions and I must say I am thankful to the Coach for giving me a chance to play,” Emeka stated.

Collins Sor opened scoring for the Flying Eagles in the 30th minute, the South Africans equalised in the 56th minute but Ghali Ahmad in the 77th minute scored off an Ibrahim Abubakar assist to restore Nigeria’s lead and ensured the Flying Eagles record their first win at the football event of the African Games currently ongoing in Rabat, Morocco.

The team had drawn 1-1 against Burkina Faso in their first game. They play host Morocco in the last group game.