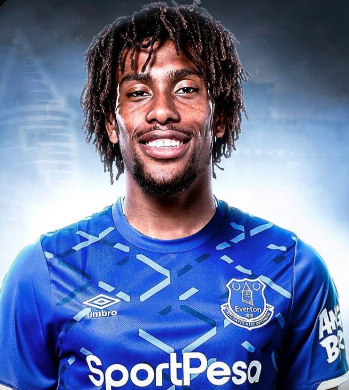 It was a mixed Friday night for some Nigerian players in action across various leagues in Europe as one man made his debut for English club Everton in their first loss of the season.

It was however the same in Spain and Germany as the duo of Samuel Chukwueze and Kingsley Ehizibue failed to inspire their respective clubs to victory.

Alex Iwobi: The Super Eagles winger was made to start from the bench for the second successive league game as the Toffees hoped to stretch their unbeaten start to the league away at newly promoted Aston Villa.

After going down 1-0 in the first half, the £35 million acquisition replaced the ineffective Gylfi Sigurdsson on the hour mark as Everton pushed for an equalizer.

Iwobi however lived up to his introduction as he hit the upright with a lovely strike before setting up striker Moise Keane for Everton’s best chance of the half but the former Juventus forward somehow failed to make the assist count.

The hosts then doubled their lead with the final kick of the game with Iwobi completing the match with an impressive game rating of 7.3, completing 89% of his passes, completing 100% of his dribbles and duels contested whilst also striking the upright in a brief 29-minute appearance.

Samuel Chukwueze: Having been named Villarreal’s revelation for the 2018/2019 season, Chukwueze was hoping to build on his last week’s goal scoring performance as Villarreal traveled to Levante on match day 2.

The visitors deservedly got the perfect start when Cameroon forward Karl Toko Ekambi played Gerard Moreno clean on goal with the Spanish forward making no mistake to put Villarreal 1-0 up after just 3 minutes.

However two penalties in five second half minutes destroyed Villarreal’s hope of their second league win as Roger stepped up on both occasions to give Levante a 2-1 win over their guest.

Chukwueze who played the entire match duration had a game rating 7.0, completing 81% of his passes, making 3 key passes and also creating 2 big chances which should have resulted to goals for his side.

Kingsley Ehizibue: The German-born Nigerian right back has continued to make a name for himself in the Bundesliga after another impressive display for FC Köln in their 3-1 home loss at home to Borussia Dortmund.

The 24-year-old who recently joined the club from PEC Zwolle in Holland featured for the entire match duration as late strikes from Jadon Sancho, Achraf Hakimi and another from Paco Alcacer ensured Koln remain without a win in two games.

Ehizibue however had a good all round game earning a game rating if 7.1, making ) clearances, 4 interceptions and winning 4 of his 6 tackles attempted.

Theophilus Solomon: The Nigerian striker had the worst possible start to life in Albania as he saw red on his  FK Partizani Tirane dubut as they lost 1-0 away at FK Kukësi.

The 23-year-old who recently joined the club last month was introduced at half time but he was quickly shown his matching orders two minutes after the hour mark after a brawl with Bruno Lulaj which left both teams with 10 men.