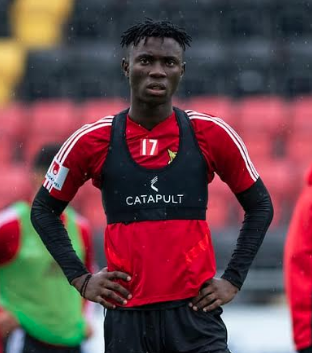 The 19-year-old, who recently joined the club after successfully undergoing trials, came on as a 61st-minute substitute for Simon Kroon but the hosts failed to hold their ground as they lost center-back Eirik Haugan who was sent off 14 minutes from time.

AIK did, however, make their numerical advantage count as they scored twice in the final three minutes to seal a 3-1 victory.

The P.Sport United youth product who spoke to AOIFootball.com shortly after the match was saddened at the manner they lost but was happy facing one of his favourite Nigerian forwards.

“I’m excited about my debut but it was not the result we wanted. We had the game under control until that red card. Hopefully, we will bounce back in our next game.

“I spoke to Chinedu Obasi after the game and he encouraged me to keep working hard as it will help me get to the pinnacle of my game. It was an amazing feeling for me because growing up I used to admire the way Obasi the line for the national team,” Attah stated.

Despite being on the pitch for just 29 minutes, the 19-year-old still managed a good rating of 6.5 and completed 67% of his passes.

Nigeria should not expect easy ride to Russia – Troussier