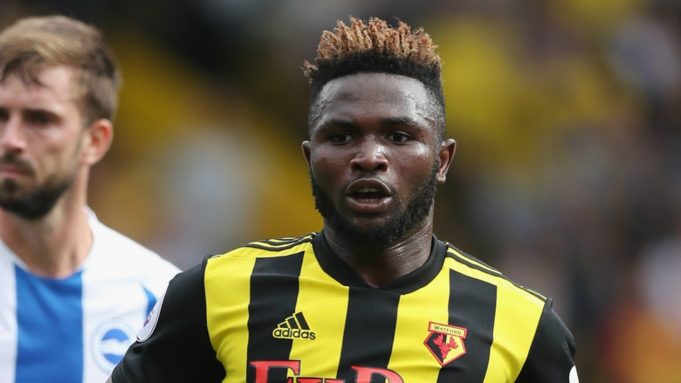 The English Football League Cup also known as the Carabao Cup entered its second round stages across different venues where Nigerian players featured for their respective clubs, AOIFootball.com reports.

Having failed to break into the starting XI in the opening three league matches, Isaac Success started his first game for Watford and helped set up two goals in Watford’s 3-0 win over Coventry whilst new signing and Flying Eagles midfielder Yom Dele-Bashiru made his official debut for the club.

Oghenekaro Etebo: The Eagles midfielder came off the bench in the second half to help ease the pressure of Stoke City manager Nathan Jones as they defeated Leeds United 5-4 on penalties to progress to the next round after the game ended 2-2 in extra time.

Etebo who was a 70th-minute substitute for young forward Tyrese Campbell, kept his cool in the shootout to convert his side’s third kick before Jack Harrison missed Leed’s fifth spot-kick to hand Stoke the win.

Leon Balogun: The Super Eagles defender made his first appearance of the season for Premier League side Brighton and Hove Albion as they overcame Bristol Rovers 2-1 to progress to the third round.

The former Mainz 05 defender was on for the entire match duration, earning a game rating of 7.4, making 6 clearances, 4 interceptions and also winning 100% of his tackles.

Isaac Success and Tom Dele-Bashiru: The Super Eagles forward delivered a man of the match performance for Watford as they claimed their first win of the season following an abysmal start to the Premier League season.

The 23-year-old played a delightful through ball to set up Senegalese forward Ismaila Sarr to open the scoring in the 37th minute before also setting up Daryl Janmaat to make it 2-0 on the 56th minute.

Just as Isaac was enjoying success on the pitch, Flying Eagles midfielder Tom Dele-Bashiru made his competitive debut for the Hornets, coming on as a 71st-minute substitute for goalscorer Ismaila Sarr.

The former Manchester City youth produce had a game rating of 6.1, complaints 92% of his passes and also came close to adding a fourth goal for his side.

Abiola Shodiya - May 7, 2017
ALL CATEGORIES
SOUNDCLOUD