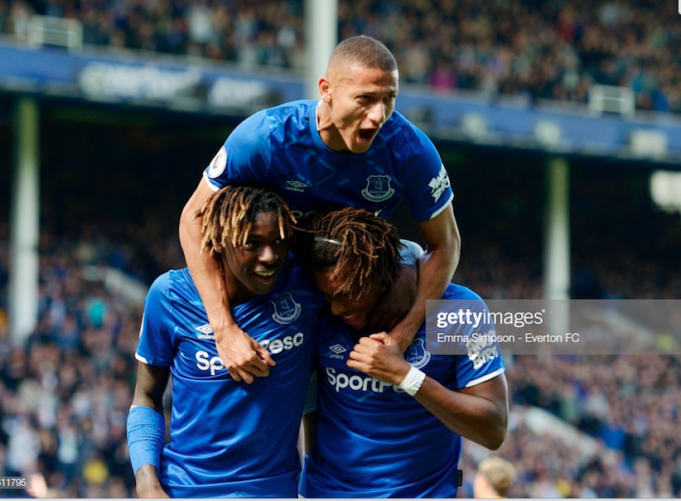 Super Eagles winger, Alex Iwobi was on the score sheet again for his new club Everton, this time scoring in their pulsating 3-2 win over Wolverhampton Wanderers, AOIFootball.com reports.

Having scored his first goal for the club in their comeback 4-2 win over Lincoln City in the Carabao Cup, the 23-year-old started his first game in front of the Goodison Park fans as the Toffees went in search of their second win of the campaign.

The hosts did not have to wait for long as a mixup in the back allowed new signing Moise Kean to feed Richarlison and the Brazilian put them ahead on the 5th minute.

Romain Saiss, however, equalized for the visitors four minutes later before Iwobi headed in his second goal in four days to put Everton back in front after 12 minutes.

Rail Jimenez then equalized for the visitors with 15 minutes left in normal time before the ever-lively Iwobi made way for Brazilian midfielder Bernard after he picked up a slight injury.

But Everton somehow grabbed the winner 10 minutes from time as Richarlison headed home a delightful cross from Lucas Digne to score his second of the afternoon and seal all three points.

Iwobi, who now turns his attention to Nigeria’s upcoming friendly against Ukraine, finished the game with a rating of 7.2, completed 76% of his passes, winning 5 duels and also completing 75% of his tackles.

Staff Reporter - May 17, 2017
ALL CATEGORIES
SOUNDCLOUD