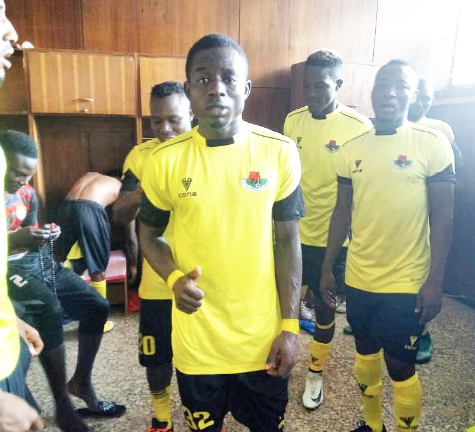 Fleet-footed attacker, Samuel Kalu is on the verge of joining Nigeria Professional Football League side FC IfeanyiUbah, for the upcoming 2019/2020 league season, AOIFootball.com has gathered.
Inside sources from the Nnewi-based club revealed exclusively to AOIFootball.com that the former Wikki Tourists of Bauchi and Jossy United of Owerri wing wizard has been with the team for quite some time, and it is strongly assumed that a transfer is imminent.
“Samuel Kalu has been with us for some time now, and we’re almost done with all arrangements concerning his signing.
“Discussions on terms and the player’s welfare have been concluded and we’re only waiting for a few documents and then, he will be unveiled,” he concluded.
The goal poacher, whose goal and heroics sent Heartland FC out of last season’s State Aiteo Cup quarterfinal, maintained that his decision to join the Anambra Warriors is in the best interest of his career, noting that the team has a structure that supports and encourage young players.
“Yes, we’re almost done with the move, and I feel happy to be part of this great family.
“I chose to be part of this club because they have a structured system that encourages young players,” Kalu concluded.