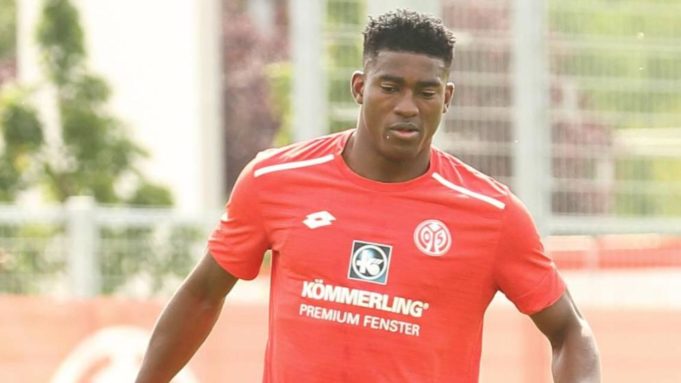 Former U-17 World Cup winning striker, Taiwo Awoniyi has revealed that there is no pressure on him from parent club Liverpool to secure a work permit, even as he continues to work hard to fulfill his dream of playing for the European champions, AOIFootball.com reports.

Speaking exclusively to AOIFootball.com, the Mainz 05 forward revealed that the English club remains hopeful that he gets a regular senior national team invite to boost his chances after frequently playing for the U-23 side.

“The stories have been miss-interpreted because the club have shown their interest in having me play with them and that was why I was sent to Mainz on loan.

“You know how difficult it is to get a work permit to play in England. I have to feature in 75% of the national team matches, which for now is beyond my control. It’s something I’m working towards because it’s the easiest chance for a permit,” Awoniyi said.

Since joining Mainz on a season loan deal, the Dream Team VII forward has featured just twice for the Bundesliga strugglers but however remains optimistic that the club will improve in the coming weeks.