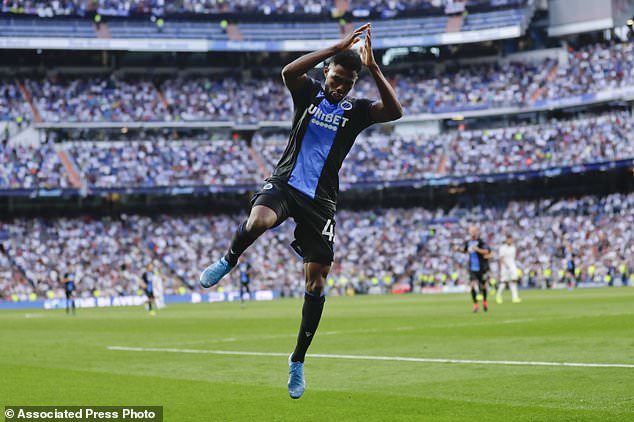 Nigerian international, Emmanuel Dennis Bonaventure made history on Tuesday evening as he scored twice as Belgium’s Club Brugge were held to a 2-2 draw at the Santiago Bernabeu, AOIFootball.com reports.

The 21-year-old started his second game in the competition for the visitors as they hoped to maintain their perfect record against Real Madrid having not lost in any of their two previous meetings.

The visitors were at it again five minutes from half time when midfielder Luka Modric was robbed of possession by Dennis with the striker blasting the ball into the net despite almost losing his footing for 2-0.

Madrid, however, came into the second half with more determination, making two half time substitutions before Sergio Ramos made it 2-1 in controversial circumstances after appearing to head home from an offside position.

Dennis was then withdrawn in the 71st minute but luck ran out on Brugge as they were reduced to 10 men before Casimero headed home five minutes from time to make it 2-2.

The result means the Brugge remain unbeaten after two games as they stay second behind group leaders PSG whom they host on matchday 3 of the competition.