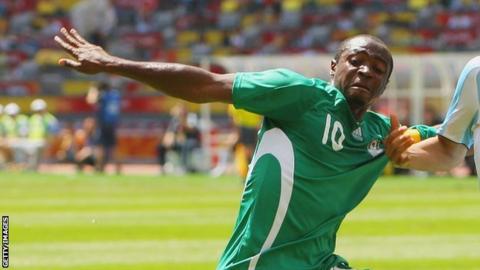 The Nigeria Football Federation has described as ‘shocking’, reports on the evening of Thursday that former Nigeria U20 and U23 captain Isaac Promise had died.

NFF General Secretary, Dr. Mohammed Sanusi, said the Federation and indeed the entire Nigerian Football was greatly saddened by the report, coming less than 48 hours after two women footballers of Nigeria Women Professional League side, Police Female Machine FC of Uyo were crushed to death by a hit-and-run Jeep driver after a training session in the Akwa Ibom State capital.

“This has been a tragic week for Nigerian Football. Isaac Promise was a very disciplined, energetic, committed and patriotic player who gave his all every time he put on the green-and-white.

“We do not know yet the cause of death, but we mourn his untimely passing at such a young age. Our prayer is that Almighty God will grant his soul eternal rest and also grant those he has left behind the fortitude to bear the big loss.”

Promise was captain of the Nigeria U20 squad that won the 2005 African Youth Championship (later renamed U20 Cup of Nations) in Benin Republic with a flourish and finished as runner-up at the FIFA U20 World Cup in The Netherlands the same year, losing narrowly to Argentina (complete with Lionel Messi) in the final.

He also captained the Nigeria U23 team that won silver medals at the men’s football tournament of the Beijing 2008 Olympics, again finishing second behind Lionel Messi-led Argentina.