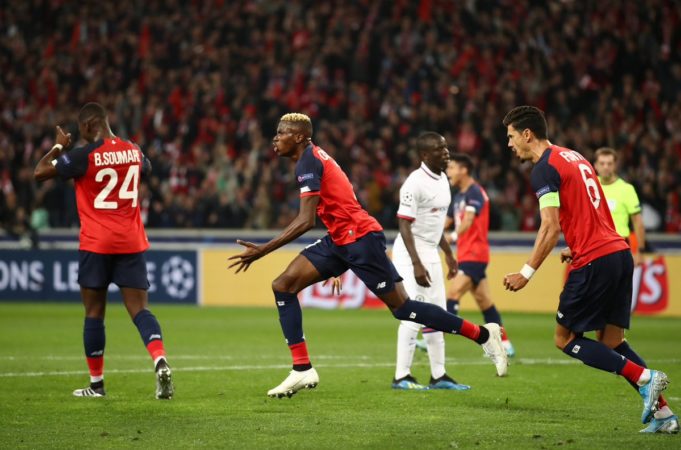 Super Eagles forward, Victor Osimhen continued his 100% home form for Lille as he scored late to rescue a point for them in their 2-2 draw at home to Nimes Olympique, AOIFootball.com reports.

Fresh from scoring his debut Champions League goal against Chelsea last Wednesday, the 20-year-old led the line for the hosts who were hoping to record their fifth league win at the Stade Pierre-Mauroy.

They, however, got off to the perfect start when former Chelsea striker Loic Remy put them ahead on 12 minutes before Osimhen received his second yellow card of the season on 38 minutes.

With halftime already in sight, the visitors equalized from the spot when Jose Fonte brought down Romain Philippoteaux with Renauld Ripart stepping up to convert for 1-1.

The host was then stunned 19 minutes from time when Renauld Ripart fed Kevin Denkey with the Togolese striker making no mistake as he scored his third goal of the campaign to make it 2-0.

But with time running out, Osimen, the league’s top scorer, equalized 11 minutes from time to net his 7th league goal of the campaign and preserve their unbeaten home run to the league.

The Nigerian now sits top of the scorers’ chart in France going into the second international free window when Nigeria takes on world champions Brazil next week in Singapore.

Samuel Kalu out of Bordeaux’s crunch clash against PSG