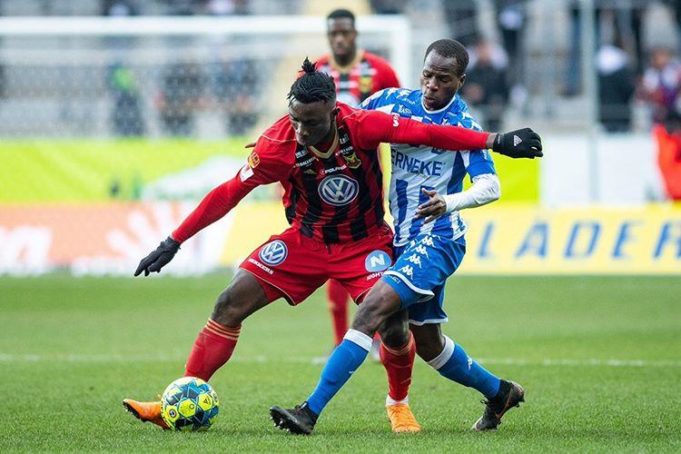 Nigerian youngster, Jordan Attah Kadiri ended his season on a high after grabbing a consolatory goal for Östersunds in their 7-1 loss away at IFK Goteborg whilst it was a sweet end to the season for Nsima Peter whose lone strike was enough to see his team survive relegation, AOIFootball.com reports.

Jordan Attah Kadiri: The 19-year-old returned the starting XI for Ostersunds as they hoped to end the season on a high having already survived relegation heading into the final game of the season.

But it was the hosts that drew first blood when Thomas Isherwood put through his own goal to give Goteborg the lead before the impressive Kadir made it 1-1 with a well taken strike to net his 3rd goal since joining the club two months ago.

The goal will however prove to be a mare consolation as the host went on to score 6 more goals with another Nigerian Alhassan Yusuf grabbing a brace for the host to hand Ostersunds their heaviest defeat of the season.

Nsima Peter: The 30-year-old was the hero for Falkenberg as he scored deep into second half additional time to hand them a 1-0 win over AFC Eskilstuna a result which was enough to see them over take Kalmar and survive relegation.