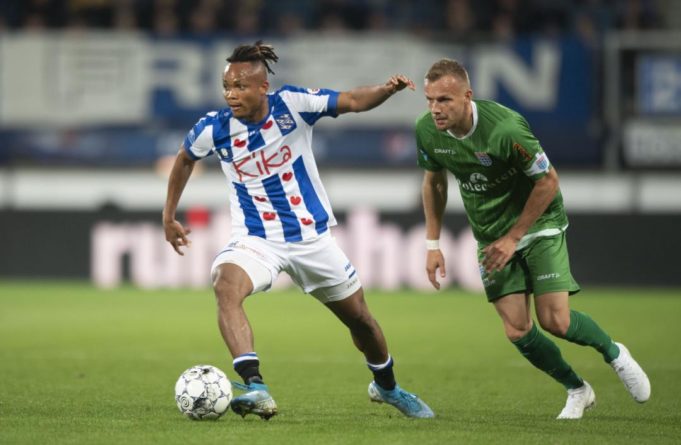 One of Nigeria’s many exports to the Dutch Eredivisie, Chidera Ejuke of Heenrenveen FC at the weekend masterminded his club’s successful comeback at home with a brace against Sparta Rotterdam after going a goal down to the visitors early in the game, AOIFootball.com reports.
Ejuke who scored in both the 73rd and 79th minutes to complete his side’s come back, was full of excitement and commended his teammates for putting up a spirited fight despite going a goal down in the in as early as the 26th minute of the match.
“I appreciate my teammates for not giving up even after conceding an early goal,” said the former Gee Lec football Academy and Gombe United FC attacker.
“Our teamwork, resilience and fighting spirit actually paid off in the end, and I’m super excited we completed the come back successfully,” he added.
Ejuke’s brace against Sparta Rotterdam brings his goals tally to 6 for Heenreveen this season in the Dutch Eredivisie, and the light-skinned pacey goal poacher maintains that he had set a personal target for himself to hit the 20 goals mark in all competitions this season.
“My target is to score at least 20 goals for my club in all competitions this season, and I will give it my best shot.
“If this can be achieved before the end of the season, then we may not be far from the top, and even European competitions,” Ejuke concluded.