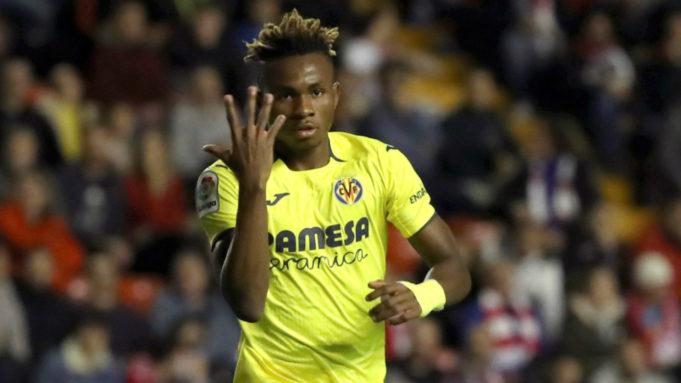 Super Eagles dazzling winger, Samuel Chukwueze scored his third goal of the season for Spanish side Villarreal in their 3-1 loss at home to relegation-threatened Celta Vigo, AOIFootball.com reports.

Fresh from scoring in Nigeria’s 4-2 win over Lesotho during the international break, the 20-year-old was restored to the starting XI for the first time since their October loss at Eibar with the hosts gunning for their 6th win of the campaign.

Both teams, however, failed to find the net in a drab first half before the visitors shocked the hosts 10 minutes after the restart when Pione Sisto converted from a Dennis Suarez assist to make it 1-0.

The lead lasted for just 5 minutes as the ever-lively Chukwueze leveled matters for the Yellow Submarines after he fired home following a lovely work from the flanks from Xavier Quintilla to make it 1-1.

Villarreal was however undone late on as two goals from Iago Aspas in the 79th and 90th minute ensured they were condemned to their 6th defeat of the season.

Despite the loss, the Eagles winger still stood out among his teammates as he finished with a rating of 8.0, completing 85% of his passes, completing 100% of his dribbles, 100% of his duels and also made one key pass in the clash.

I always give everything for Nigeria, says Echiejile