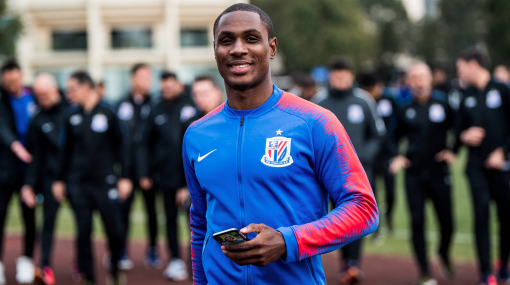 Former Super Eagles striker, Odion Jude Ighalo has revealed he isn’t distracted by the transfers rumours linking him to an English Premier return as he shifts focus to this weekend’s Chinese Cup final against Shandong Luneng, AOIFootball.com reports.

The 2019 AFCON golden boot winner had an injury-ravaged 2019 season with Shanghai but now hopes to end all that on a high with the cup final.

“The speculations will always be there, but we have an important game this Friday and that is all I can think of for now. It’s been a tough season and it can only get better if we go on to win the cup for the fans and the club.

“Obviously, there are offers from the EPL but maybe during the Christmas break I will think about them but for now the game against Shandong is the ultimate,” Ighalo said.

Ighalo scored 10 goals in 17 games for Shanghai Shenhua and also led Nigeria to Bronze at the 2019 AFCON where he won the golden boot. He has however attracted offers from several EPL clubs who want to boost their attack line ahead of the winter transfer.